Peedpop was standing at a precipice. He looked determined and was totally deaf to the crowd yelling below. And then he saw her face. Radiant. Vaseline teary. Reddish and swollen.
She ran forward and shouted, "#$ #@#..! #@#..! #@#...!!". Zero response.
Peedpop gingerly took a step forward. He looked as if he was waiting for the auspicious second. Five minutes later, after a splitting headache, she came running from behind and said the golden three words, breathlessly. Those three unspeakable words; never to be uttered, except under dire circumstances; three words that apparently made Peedpop's life or death. Peedpop stared.
"@###, $%#$ &^& $##@#$..?", Peedpop asked.
"$$$$ @@@$!#$ @$ 431$$5$ 5$@% ...!!" , she replied.
Peedpop looked dumbstruck.
"Do you really, !@@# #@#@...?", he asked with a spot of surprise still left in him.
She answered with a bright, Canadian flag-red blush.
Peedpop was beyond himself and instantly went mad. He clutched his hair in disbelief and ran around in circles. He suddenly stopped and went close to her. He gingerly touched her face. She looked down, coyly averting her eyes, still blushing away furiously.
The scene changed to vast, ice-covered hills and it started.

Male: Aaaaaaaaaaaooooo...
Female: Mmmmmm He.. he.. he.. ooooohhhh..

And so it went on and on. Unsurprisingly, Peedpop was wearing a bright red toga and his fiancee was showing off her midriff in a bright green blouse and an yellow skirt, that looked as if it was tailored for a baby. As she shook her hips from left to right that lifted her skirt even higher, Peedpop desperately tried to invade her navel. A bunch of foreigners were staring at the pantomime, faintly amused. Peedpop moved all his limbs in multiple directions, more or less like the Vitruvian Man in spasms. She was enraptured by his movements and joyfully jumped monkey-style into his arms. He groaned, but held on. It went on. And on. The skirt rose higher with every passing minute. With all the ice around, how the hell did she not get hypothermia, is a question that has its answer shrouded in mystery. Or shall I say, unshrouded?

That was the last time I saw a Kannada movie.
Peeled by Sirpy on Wednesday, September 26, 2007 29 comments:

The Woman Who Swore

I was on my way back from Chennai after a rather hectic, two day trip. Most part of the two days, saw me running around the countryside with a blue file, whilst my Mom watched movies at Satyam, munching fries and popcorn. I used to give her a glare every time I saw her and she smiled patronizingly. It made it all the more worse. I was more than glad when the mini vacation for my Mom got over and we were on a train, bundled for Coimbatore.
Everything was fine, until we reached Arakkonam. I was trying to look past the cranky, old woman seated next to me, at the hawkers for a cup of coffee when a whiff of jasmine caught my nostrils. I turned 180 degrees in reflex and saw an apparition in white. A red arrow poked into my chest and a plane crashed in East Australia. She got into the train and looked around the compartment, searching for something. I was desperately praying. She glided forward, swinging her duffel bag and came to a stop in front of me. And then she sat. I started blushing profusely. My Mom was going over her with a critical eye, ever-protective of her vulnerable son and clutched my arm. The old woman was muttering something about the kind of women that women give birth to nowadays and proceeded to damage the apparition's entire lineage.
I was stone-deaf and bat-blind to all these so-called negative, ultrasonic waves of personal emotion that flowed around me. My target was fixed and I was preparing myself for the fight. I felt like Rocky in Rocky - IV. It was survival. It was endurance. And I had both of them by the barrels. I flexed my eyebrows and crunched my jaws. A bit rusty but in perfect, working condition, I thought. It was my weapon. The same weapon which I used to woo multiple females looking like both sides of Naomi Campbell. The same weapon with which I defeated my current girlfriend. It was my Look.
The Look is one of its kind. It has never been unsuccessful (except on two occasions, when the recipients turned out to be members of the some, unidentifiable sex/species). And it can never be replicated. It is unique. And I was ready with it; armed to the teeth.
Seconds before I gave the Look, something happened that made me realize that if ever I was going to cheat on my girlfriend again, I would rather hang myself from the Golden Gate bridge, before doing it. As I looked at the apparition, she slowly lifted her golden face from the Kumudham which she was reading and brushed away a strand of hair. My heart skipped a beat. She then stretched, her waist straining at her churidhar and proceeded to pull down the shutters on the windows.

Interlude:
Now some background information is needed, before we reach the ending of my shortest flirt. Old women are supposed to be inherently sweet. But this woman, the one sitting on my left, apparently was not. She looked and behaved like the wife of the caretaker of hell. She nonchalantly put her rheumatic legs on top of mine; shouted loudly at hawkers and beggars in some foreign language, that mysteriously sounded like a mix of Tamil and Sudanese; made angry gestures at a blind beggar and spilt my precious cutlet and vadai all over my clean, white trousers; burped loudly and disgustingly; and smelt seemingly of paan and old, dried fish.

Coming back, at the exact second Miss White was trying to pull down the shutters, the old woman suddenly seemed to have felt the irresistible urge to empty her constantly, masticating mouth and did so promptly. Right onto Miss White's butt, which was blocking the window. Whether the act was intentional or otherwise, no one came to know. The red splotch was visible for a second, after which it started soaking and got bigger and bigger. Time stood still, during when my Eco sir popped into my brain for no apparent reason, made a rude movement with a finger and scuttled off, as fast as he had come. Miss White turned back, gave one look and screamed. She did not scream like they do in B-grade horror movies, say for example Darling or Aag; she screamed along with the ugliest swear word I have ever heard in my life. I closed my Mom's ears and she closed mine. I was horrified and instantly totally repelled. My ideas changed.
And at that same exact second, my actual girlfriend materialized and she smiled knowingly. I mouthed, "I'm sorry". The vision smilingly vanished. And I turned my attention to another apparition in blue, who had just entered the compartment. My eyebrows are not going to be betrayed.
Peeled by Sirpy on Thursday, September 20, 2007 20 comments:

And so it is done. The dratted End Terms. The bane of every student and currently, those here. It was over in a flash. But the preparation seemed an eternity. At the end of it all, I don't remember a single thing I've learnt. All that I can recall are the innumerable teas and coffees, the pilfering of Dairy Milk bars, the air conditioning while taking the tests freezing your pee, the lack of it while mugging, the pointless discussions, the creative and unending stream of curses that flow between guys after the tests, the shirk of shoulders, the load of porn (Mom, I am sorry. I did not mean to. Or did I?) the teeny-weeny bits of shut-eye that we got, the smell of chicken Maggi and of course my girlfriend's occasional pep talk that does as much damage as a tanker on a flower bed.
Anyway, it is done and over. I know it will come again. Viva, l'testis*!
PS: I am guaranteeing a better post next time. I was high when I wrote this. In fact, I have no recollection at all of writing. Sheesh. Which idiot will want to write exams? It is a prisoner's dilemma.

*ain't that the way how the French pronounce tests?
Peeled by Sirpy on Thursday, September 13, 2007 4 comments:

Battle of the Blues 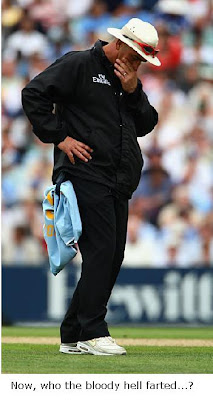 It was not funny at all. I was there, sitting in that wretched coffee shop, trying to drown myself in the nitty-gritties of microeconomics, with a lukewarm capuccino that tasted like it was made with the same mud, that Vasco Da Gama shook out of his boots when he landed in Kerala. I was trying to concentrate and was completely, successfully unsuccessful. I was in utter despair and turned to look out through the glass, seconds before I toppled out the chair and poured the muddy beverage all over my precious gold-wrought knickers.
There was a huge crowd staring right at me, through the glass. I looked and felt a fool. It was not a new feeling anyway, as my girlfriend would comment with immense sarcasm. But still, it was a bit too sudden. I was trying to look dignified and delicately picked myself up, trying not to lose my sex appeal in the process. They were still staring at me. I was puzzled.
I have never been stared at for so long by anybody; let alone a bunch of awestruck, pretty specimens of the fairer sex. The last time anybody stared at me was when I was hopping around in apparent pain, in the middle of the road, having caught myself in the zipper. The phenomenon was and is not regular. I rationalized. After pretty, heavy-duty calculations that would have required the processing capacity of at least six supercomputers, I made the obvious conclusion. It was not me that they were staring at.
And after making a thorough and extensive study of the surroundings that included two old men who were trying to dump their wives and elope, I decided that neither was it because of,
1) the hot female in a bathing suit, with shapely thighs sitting behind me; nor
2) the hot female in a bathing suit sitting behind me; nor
3) the hot female in a suit sitting behind me; nor
4) the hot female sitting behind me; nor
5) the female sitting behind me, even.
I was still looking around, making assumptions and discarding them like Bluebeard's wives, when I heard the crowd roar a single word in unison and a brick loosened from the ceiling.
"Four..!!!"
The fog cleared. Clarity rose. Cognition proceeded. Enlightenment dawned. Birds flew. Crows pooped. Mosquitoes bit. The brick fell. Trains ran. Goats bleated. DFock yawned. Etc.
I slowly swivelled in my chair to see a 40 inch monitor, mounted high on the wall and watched a white ball being tossed around a green field. I could not help myself cheering though I would have rather preferred women wrestling. And surprisingly, we won.
Peeled by Sirpy on Thursday, September 06, 2007 9 comments:

These are the experiences of a primate caught in an urban jungle. To his chagrin. A radical who believes that stupidity and awesomeness go hand-in-hand; like dosai and chutney.

This work by Sirpy is licensed under a Creative Commons Attribution-No Derivative Works 2.5 India License.
Based on a work at themankeys.blogspot.com.